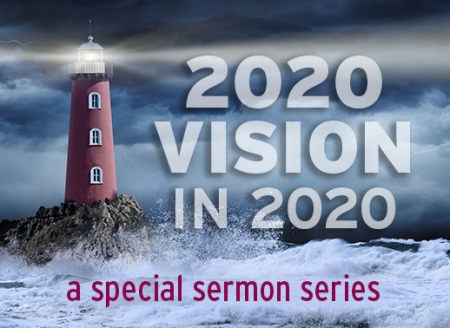 Every January we begin a new theme for the year. Our theme for this year, "2020 Vision in 2020" is taken from Proverbs 29:18, "Where there is no vision, the people perish"  Each month we will have a new memory verse and study an aspect of vision in the Bible.

January
After these things the word of the LORD came unto Abram in a vision, saying, Fear not, Abram: I am thy shield, and thy exceeding great reward. - Genesis 15:1

February
And God spake unto Israel in the visions of the night, and sald, Jacob, Jacob. And he sald, Here am I. - Genesis 46:2

March
And the child Samuei ministered unto the LORD before Eli. And the word of the LORD was precious in those days; there was no open vision. -  1 Samuel 3:1

April
And when they found not his body, they came, saying, that they had also seen a vision of angels, which said that he was alive. - Luke 24:23

May
And he sought God in the days of Zechariah, who had understanding in the visions of God: and as long as he sought the LORD, God made him to prosper. - 2 Chronicles 26:5

June
Where there is no vision, the people perish: but he that keepeth the law, happy is he. - Proverbs 29:18

July
As for these four children, God gave them knowledge and skill in all learning and wisdom: and Daniel had understanding in all visions and dreams. - Daniel 1:17

August
And as they came down from the mountain, Jesus charged them, saying, Tell the vision to no man, until the Son of Man be risen again from the dead. - Matthew 17:9

October
Whereupon, O king Agrippa, I was not disobedient unto the heavenly vision: - Acts 26:19

November
And a vision appeared to Paul in the night; There stood a man of Macedonia, and prayed him, saying, Come over into Macedonia, and help us. - Acts 16:9

December
And when he came out, he could not speak unto them: and they perceived that he had seen a vision in the temple: for he beckoned unto them, and remained speechless. - Luke 1:22